The beauty of Asia - Anna May Wong 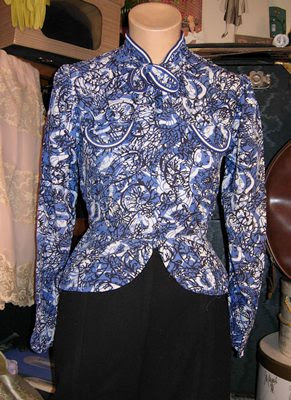 I saw this lovely "Asian inspired" blouse at Dandelion vintage and suddenly remembered one of my favorites movie stars - Anna May Wong. 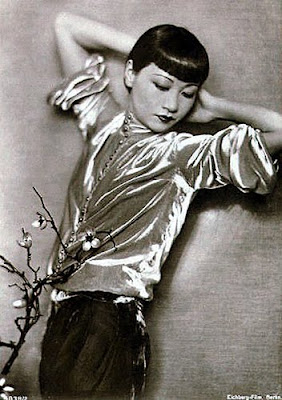 Anna May Wong, the first Chinese-American movie star, was born Wong Liu Tsong on January 3, 1905, in Los Angeles, California, to laundryman Wong Sam Sing and his wife, Lee Gon Toy. She was born in Flower Street in Los Angeles in an integrated neighborhood dominated by Irish and Germans, one block from Chinatown, where her father ran the Sam Kee Laundry. 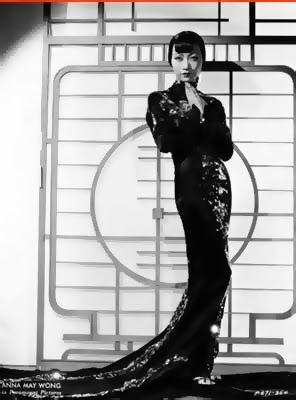 Educated at a Chinese-language school in Chinatown, she would skip school to watch movie shoots in her neighborhood. She made tip money from delivering laundry for her father, which she spent on going to the movies. Her father, if he discovered she had gone to the movies during school hours, would spank her with a bamboo stick. Around the time she was nine years old, she began begging filmmakers for parts, behavior that got her dubbed "C.C.C." for "curious Chinese child." 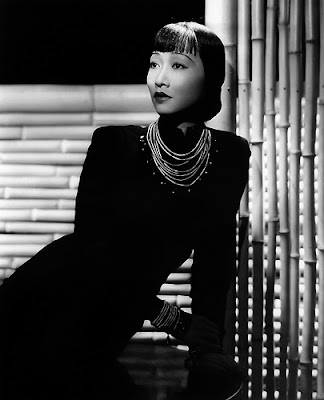 The 170-cm-tall (5'7") beauty was known as the world's best-dressed woman and widely considered to have the loveliest hands in the cinema. Her big breakthrough after her auspicious start with "The Toll of the Sea" finally came when Douglas Fairbanks cast her in a supporting role as a treacherous Mongol slave in his Middle Eastern/Arabian Nights extravaganza "The Thief of Bagdad" (1924). The $2 million blockbuster production made her known to critics and the movie going public. For better or worse, a star, albeit of the stereotypical "Dragon Lady" type, was born. 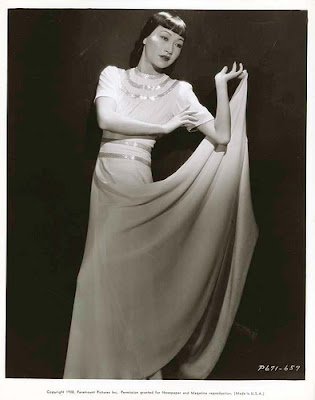 Despite her waxing fame, she was limited to supporting roles, as Caucasian actresses, including most improbably Myrna Loy, continued to be cast as Asian women in lead roles in the 1920s through the 1940s, despite the ready availability of Anna May Wong. She was unable to attract lead parts despite her beauty and proven acting talent, even in films featuring Asian women, but she did carve out a career as a supporting player in everything from A-list movies to two-reel comedies and serials. The characters she played typically were duplicitous or murderous vamps who often reaped the wages of their sin by being raped. It was a demeaning apprenticeship that most Caucasian actresses did not have to go through. 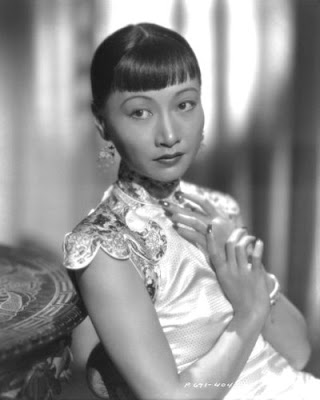 A third-generation American, she managed to have a substantial acting career during a deeply racist time when the taboo against miscegenation meant that Caucasian actresses were cast as "Oriental" women in lead parts opposite Caucasian leading men. The discrimination she faced in the domestic industry caused her to go to Europe for work in English and German films.
Anna May Wong wanted was to play modern American women all through her career but was thwarted because of racism. Later, when she removed herself to Europe to escape the typecasting of Hollywood, she told journalist Doris Mackie, "I was so tired of the parts I had to play. Why is it that the screen Chinese is aways the villain? And so crude a villain--murderous, treacherous, a snake in the grass." 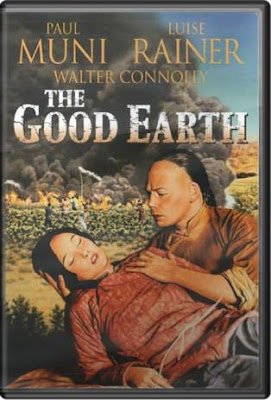 MGM screen-tested her for the lead role of O-Lan, the sympathetic wife of Chinese farmer Wang Lung (to be played by Paul Muni, personally cast in the part by Irving Thalberg) in Pearl Bucks "The Good Earth". She also was considered for the supporting role of Lotus, Wang Lung's concubine. Anna May Wong, an ethnic Chinese, lost out on both roles to two Austrian women, Luise Rainer and Tilly Losch, as Albert Lewin, the Thalberg assistant who was casting the film, vetoed Wong and other ethnic Chinese because their looks didn't fit his conception of what Chinese people should look like. 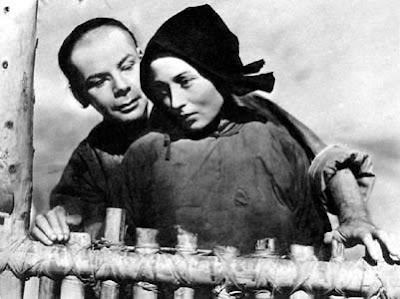 Ironically, the year "The Good Earth" came out, Wong appeared on the cover of Look Magazine's second issue, which labeled her "The World's Most Beautiful Chinese Girl." Stereotyped in America as a dragon lady, the cover photo had her holding a dagger. 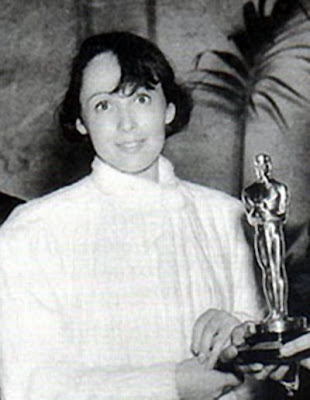 Luise Rainer would win the Best Actress Oscar for her performance of O-Lan in 1937. 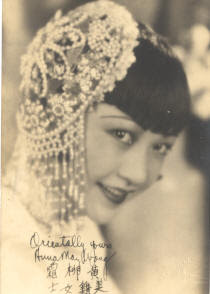 Ann May Wong appeared in over 50 American, English and German films in her career, making her the first global Chinese-American movie star. She was forced to fight against racism and stereotyping all her professional life, while simultaneously being criticized by Chinese at home and abroad for perpetuating stereotypes in the media. Despite this tremendous burden, the beautiful woman assayed an elegance and sophistication on-screen that made her the paradigm of Asian women for a generation of movie audiences. Anna May Wong died on February 3, 1961, in Santa Monica, California. She was 56 years old.

Text from imbd.com. Read more about her here.
Posted by Diva at 1:59 AM

she was wonderful, wasn't she? love that vintage Anna-inspired find, too!

I agree, although I haven´t seen her in film myself I always thought she was the epitome of 1930s style !

She was grace personified...so elegant, so timelessly beautiful, and such a deeply talented actress. Thank you for highlighting these wonderful gem of a woman.


Many wishes for a marvelous Sunday, honey!
♥ Jessica

Whoa this is lovely!
I'm so glad I came across your lovely blogspot! And your Vintage Style Files too!
Looking forward for heaps more!
Thank you. xoxo