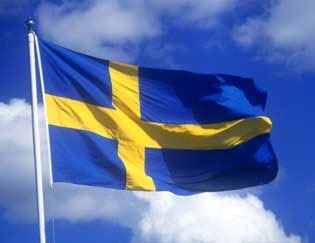 '
I'm not a very nationalistic person, but there are some things I am immensely proud of about Sweden; that we are by law forbidden to hit our children, that we have not had war for centuries, that our education system and national health care is free, that we have a generous maternity leave (all working parents are entitled to 16 months paid leave per child, the cost being shared between employer and the state. To encourage greater paternal involvement in child-rearing, a minimum of 2 months out of the 16 is required to be used by the "minority" parent, in practice usually the father - Wikipedia) and a daycare systems available to all just to mention a few things.

Since 1916, June 6 has been celebrated as Swedish Flag Day. This finally also became Sweden’s National Day in 1983 and a public holiday from 2005.

The date was chosen for two reasons: the election of Gustav Vasa as Sweden’s king on June 6, 1523, laid the foundation of Sweden as an independent state; and on the same date in 1809, Sweden adopted a new constitution that included the establishment of civil rights and liberties. 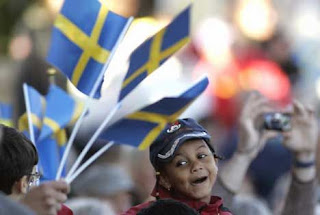 Sweden has not taken part in any of the wars of the modern era, which may explain the Swedes’ somewhat guarded attitude towards celebrating a national day. They are proud of their country but don’t seem to feel any great need to show it. Previously, 6 June was not a public holiday, and today, Swedes will celebrate their national day only for the second time since it became a public holiday. Demonstrations of national pride don’t come naturally to Swedes, who are still deciding what to do with the holiday. 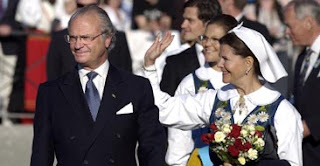 (Our King Carl Gustaf and Queen Silvia under more happy days... At the moment, both of them have been sharply criticized in media. )

“Some Swedes say, ‘Why do we need a national day when we have midsummer? Midsummer is our national holiday.’ But many new Swedes think it is important to celebrate living in a free and independent country.”

And speaking of Midsummer ( our biggest Swedish holiday) ! 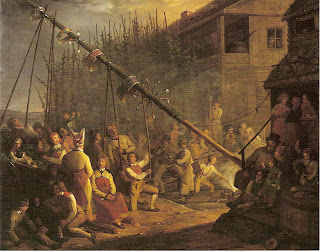 The summer solstice is the reason why we celebrate Midsummer. Ever since pagan times, Swedes have been eager to feast through the longest day of the year, on or around June 21. Since the 1950s we have, for practical reasons, celebrated Midsummer on Midsummer Eve, which is always on a Friday between June 19 and June 25. 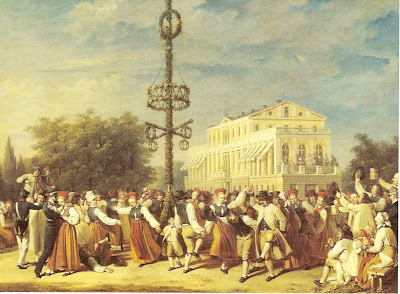 1. Picking wild flowers — both for the wreath that you will be wearing on your head and for the maypole, or rather, midsummer pole. 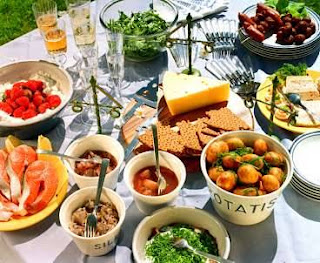 Typically, a table is set outside.The food on the table is fairly basic: different varieties of pickled herring, new potatoes with dill and sour cream. Fresh strawberries with whipped cream or strawberry cake often follow. Most adults like to wash down the herring with schnapps (a shot of alcohol), usually preceded by a short, often quite silly schnapps song, of which there are plenty, passed on from generation to generation. The Swedish schnapps is distilled from grain or potato and is often flavored, but never sweet. When people are fed and happy, the dancing can begin! 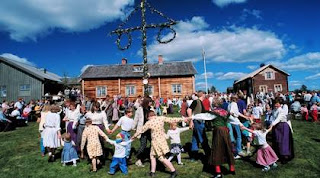 Adults and children alike form a circle around the midsummer pole and dance to traditional songs. The actual dancing is more or less a matter of moving in one direction, so not too complicated. Many towns and villages arrange public midsummer dancing, where a group of folk musicians accompany the dancing crowd. As it never really gets dark on Midsummer, the party can go on for hours on end. Eventually, the mist starts dancing across the fields, and it may, after all, be time for bed. But first you pick seven flowers... 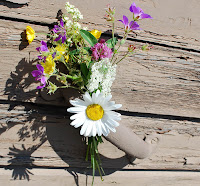 The celebration of Midsummer's Eve was from ancient times linked to the summer solstice. Some people believed that mid-summer plants had miraculous healing powers and they therefore picked them on this night. (Wikipedia)

If a young woman picks seven different flowers and lays them under her pillow on the night to Midsummer Day, she will supposedly dream of her future spouse...

All the information in this blog post is from Sweden.se

I end with some good old fashioned Swedish folk dancing, costume and all! Sadly to say, not too many know of us know how to dance like this anymore!

Happy 6th of June to all of us in Sweden!

I have a good friend from Sweden and he has always made me want to visit. How long have you lived in Sweden? I've never been to Europe before but I definitely would like to take a vacation and see various countries!